Youths from across the world are coming to Rojava, uniting here and taking their place in the defense of free life on the fronts of resistance. The sacred land gets wet with blood and tear. 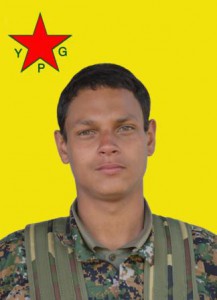 YPG said that one of these heroes was comrade Kevin Jochim (Dilsoz Bihar), of German origin, who was born into an esteemed family in the German city of Karlsruhe on 2 November, 1993. He joined the ranks of the freedom struggle in 2012, after which he took place in numerous daring battles and played an important role in the liberation of ISIS-occupied villages and settlements within the Operation Commander Rubar Qamishlo.

This entry was posted in Sehid, YPG. Bookmark the permalink.